The world’s most famous cake, the Original Sacher-Torte, is the consequence of several lucky twists of fate. The first was in 1832, when the Austrian State Chancellor, Prince Klemens Wenzel von Metternich, tasked his kitchen staff with concocting an extraordinary dessert to impress his special guests. As fortune had it, the chef had fallen ill that evening, leaving the apprentice chef, the then-16-year-old Franz Sacher, to perform this culinary magic trick. Metternich’s parting words to the talented teenager: “I hope you won’t disgrace me tonight.”

Franz Sacher seized the moment and conjured up the confection of a lifetime, the chocolate cake that would go down in history as the ne plus ultra of desserts: the Original Sacher-Torte. Disgrace, in any case, was not on the menu that evening. The cake soon gained a cult following, and was deemed “presentable at court”. From then on, it was a favorite at the imperial court and soon went on to win the hearts (and palates) of the world.

This is only an approximation of the original recipe, which of course must remain a tightly-kept secret.

Sachertorten Rezept
Ingredients
Cake
130 g
dark couverture chocolate (min. 55% cocoa content)
1
Vanilla Pod
150 g
softened butter
100g
Icing sugar
6
Eggs
100 g
Castor sugar
140 g
Plain wheat flour
Other
Fat and flour for springform
200 g
apricot jam
200 g
castor sugar
150 g
dark couverture chocolate (min. 55% cocoa content)
Unsweetend whipped cream to garnish
Ergibt eine Auflaufform
(Durchmesser: 24 cm)
Kühlzeit: ca. 20 Minuten
Backzeit: ca. 1 Stunde
Print Recipe
Preheat oven to 170°C. Line the base of a springform with baking paper, grease the sides, and dust with a little flour.
Melt couverture over boiling water. Let cool slightly.
Slit vanilla pod lengthwise and scrape out seeds. Using a hand mixer with whisks, beat the softened butter with the icing sugar and vanilla seeds until bubbles appear.
Separate the eggs. Whisk the egg yolks into the butter mixture one by one. Now gradually add melted couverture chocolate. Beat the egg whites with the castor sugar until stiff, then place on top of the butter and chocolate mixture. Sift the flour over the mixture, then fold in the flour and beaten egg whites.
Transfer the mixture to the springform, smooth the top, and bake in the oven (middle rack) for 10–15 minutes, leaving the oven door a finger's width ajar. Then close the oven and bake for approximately 50 minutes. (The cake is done when it yields slightly to the touch.)
Remove the cake from the oven and loosen the sides of the springform. Carefully tip the cake onto a cake rack lined with baking paper and let cool for approximately 20 minutes. Then pull off the baking paper, turn the cake over, and leave on rack to cool completely.
Cut the cake in half horizontally. Warm the jam and stir until smooth. Brush the top of both cake halves with the jam and place one on top of the other. Brush the sides with the jam as well.
To make the glaze, put the castor sugar into a saucepan with 125 ml water and boil over high heat for approximately 5 minutes. Take the sugar syrup off the stove and leave to cool a little. Coarsely chop the couverture, gradually adding it to the syrup, and stir until it forms a thick liquid (see tip below).
TIPP
HOW TO TEST WHETHER THE GLAZE HAS THE RIGHT CONSISTENCY
Let a little of the glaze run over a wooden cooking spoon. It should now be covered by a layer of glaze approximately 4 mm thick. If the glaze is too thick, add a few drops of sugar syrup to dilute it (to do so, loosen any remaining sugar in the saucepan with a little hot water). Make sure the glaze does not get too hot, or it will be dull when cooked and not glossy.
Pour all the lukewarm glaze liquid at once over the top of the cake and quickly spread using a palette knife. Leave the glaze to set for a few hours. Serve garnished with whipped cream.

The Cake With a Cult Following: The Original Sacher-Torte

There will always be critics, of course, and some found the Original Sacher-Torte rather plain. After all, more lavish creations existed. The simple truth, however, is that simplicity is the heart of greatness in our modern world.
Compared to other cultural classics, it has more of an affinity to Bauhaus than to Baroque. “Elegance is refusal,” Coco Chanel famously remarked

– and Franz Sacher certainly refused all but the essentials when creating his recipe.
He composed his chocolate chef-d’oeuvre with clever minimalism: butter, sugar, eggs, chocolate, flour, and apricot jam. The perfect harmony of these combined ingredients, in fact, is what makes the Original Sacher-Torte extraordinary. 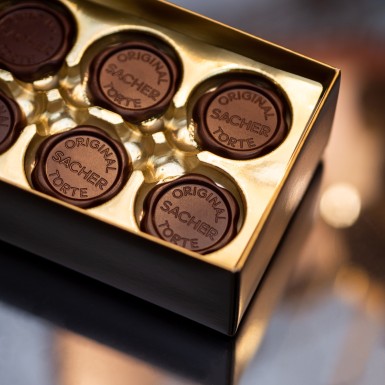